We have selected 6 things to do, so that you can enjoy the best that the Lisbon region has to offer. There are countless things to do in this vibrant and cosmopolitan city, which has been on everyone’s lips for all the right reasons.

Lisbon, the capital and largest city of Portugal, is a culturally rich city. With a very ancient history, which makes its origins disappear in the mist of centuries, you will love to discover the metropolis conquered by D. Afonso Henriques in 1147 and capital of the kingdom since 1255.

Belém became the departure pier for ships and caravels that discovered new worlds and a mercantile center where spices from the East arrived and were traded. A feat celebrated by the Belém Tower, an architectural jewel from the 16th century, when Portugal was in fact a global power, and by the Jerónimos Monastery, from the same period, both classified by UNESCO, in 1983, as Cultural Heritage of Humanity. In the parish of Belém, you can also visit the Padrão dos Descobrimentos, the Coach Museum, the Belém Cultural Center, the Museum of the Presidency of the Republic, among many others. Oh, and don’t forget to visit Fábrica dos Pastéis de Belém to taste one of the ex-libris not only of Lisbon, but of Portugal!

02. Go up to the Castle of São Jorge and stroll through Alfama

The Castelo de São Jorge occupies the top of a hill overlooking the historic city center and the Tagus River. Here, you will learn a little more about the history of Lisbon in the permanent exhibition and discover unique views strolling through the gardens and the viewpoint.

But not only monuments make up the soul of a city and, in 2011, Lisbon saw its popular song, Fado, also distinguished by UNESCO as part of the Intangible Heritage of Humanity. In Alfama, in addition to strolling through the alleys that make you feel in the middle of a village, you can also visit the Fado Museum and watch shows in the most diverse restaurants, bars or Fado houses.

As you walk around Baixa, you can find Praça da Figueira, the magnificent Rossio Station, the Santa Justa Elevator, watch the tram go by, feel like a local. Already with our eyes on the Tagus River, we find one of the most emblematic squares: Praça do Comércio, symbol of the city and its reconstruction after the great earthquake of 1755. the view over the Tagus River.

Chiado is an elegant and sophisticated neighborhood with bookstores and old-style cafes, where we can find a traditional shopping area that mixes old and modern commercial establishments. The most famous café in Chiado is “A Brasileira”, as the poet Fernando Pessoa passed among its customers. Chiado is also an important cultural space, with several museums and theaters.

Lisbon is also known for having a very lively and busy night. Bairro Alto is one of the oldest and most peculiar neighborhoods in Lisbon, where calm and serenity reigns during the day and at night welcomes the movement that makes Lisbon’s nightlife famous.

05. See the city through the viewpoints

There are countless viewpoints that allow you to glimpse Lisbon. Choosing the best viewpoint in the city is impossible, but here are some suggestions: Miradouro de Nossa Senhora do Monte; Santa Luzia Viewpoint; Portas do Sol Viewpoint; Viewpoint of São Pedro de Alcântara; Miradouro da Graça; Viewpoint of the Garden of Collection; Keil do Amaral Viewpoint; Panoramic of Monsanto; Miradouro do Arco da Rua Augusta; Sanctuary of Cristo Rei, among many others.

06. Be dazzled by the beauty of Arrábida

The beauty of Arrábida is painted between the green of the mountains and the blue of the sea. Just over half an hour from Lisbon, there are a number of reasons to leave the city and indulge in discovery. A territory that covers three counties – Palmela, Sesimbra and Setúbal.

The crystalline waters surrounded by vegetation and white sand offer postcard-worthy images. The meeting of the mountains with the sea materializes in a kind of string of beaches, each with its own particular charms. The hard part is choosing: Figueirinha, Portinho da Arrábida, Coelhos, Ribeira do Cavalo, Galapos or Galapinhos, among others.

A place not to be missed is Cabo Espichel, where the landscape is breathtaking, between the dark depths of the sea, the stability of the earth and the infinity of the sky. Here we find the Nossa Senhora do Cabo Sanctuary, which celebrates a cult inspired by the legend of a man who saw a great light on top of the cliff. Our Lady would have climbed the steep slope sitting on the back of a donkey. The legend drew inspiration from the dinosaur tracks visible on the hillside and interpreted as the footprints of a donkey.

In the gastronomic chapter, as it should be, fish and seafood are kings. As for starters and desserts, the Azeitão cheese and pie stand out. To accompany, it is worth bearing in mind that this land is also famous for the quality of its grapes. From Moscatel to Bacalhôa or José Maria da Fonseca nectars, just choose what best suits the moment.

What do you think? Did we cover enough of the places to visit in Lisbon that you feel ready to take a trip right now? We hope so! There is so much more to enjoy here in our home country, so we invite you to get in touch to plan your own perfect itinerary.

We’d love to help you see the very best of Portugal! 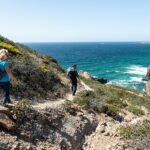 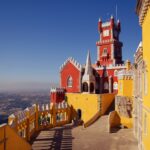